Madeleine’s father, Colin Fraser was born in 1805 in Sutherlandshire, Scotland. He entered the service of the Hudson Bay Company on March 1827 in Stromness, Scotland. Colin Fraser manned the second Jasper House for fifteen years from 1835 to 1850. Fraser, a most engag-ing Scotsman, commanded the post with his Métis wife and nine children.

In 1831, prior to his arrival to Jasper, Colin married 18-year-old Nancy Beaudry, daughter of Joseph (Gandry) Beaudry, and Lesette Châtelain who was a descendant of one of the earlier French traders Louis Châtelain. Colin, his wife and two-year-old daughter Betsy started their long residence in the Athabasca Valley. When Colin went to Jasper, the aging J.B. Breland was still there and had already given his name to what everyone then called Baptiste’s Riv-er, which is now called the Berland. In Colin’s time in Jasper, there were many families living there including the Wanyandies, Karakunties, Findlays and others.

Although Colin was married to Nancy Beaudry, he had a union with Therese Karakuntie, daughter of Louis Karakuntie, one of the 1804 Iroquois voyageurs. In one archival document, Therese was listed as Colin Fraser’s second wife. Colin and Therese had a daughter that they called Madeleine.

Therese Karakuntie was married to Francois Breland (Berland) and they had six children be-fore Madeleine was born, and more four children after her birth. Madeleine was born in 1847, the same year as her half-brother Colin Fraser Jr.

Madeleine Fraser married Alexis Joachim on October 7, 1861. The Joachim family has its roots in the Montreal area. In 1818 the North West Company hired Joachim/Tonatanhan, an Iroquois from the Montreal area to go to Alberta to trap. The Macpherson database lists his full name as Pierre Yehonnatahe Tawanatahan/Joachim. In 1822-3, the Hudson Bay Company tried to convince some Iroquois stationed in the Lesser Slave Lake region, to go to the Smoky River area to trap, but only Pierre went. He married Marie Kalahash on October 5, 1853 and Father Lacombe performed the service in Jasper. The couple had six children; Louise, Marie, Martin, Charles, Adam and Angele.

Madeleine and Alexis’ son, Adam Joachim was born at Berland Lake in 1875 and he claimed Iroquois heritage, and was proud of being Colin Fraser’s grandson. Adam went to Seminary school in Montreal and could speak and read four languages: English, Cree, French and Latin. Adam then became the leader of the Métis that were evicted from Jasper National Park.

Adam Joachim became a prominent leader and legend in the Alberta Northern Rockies region. This educated and brilliant man became a founding member of the Métis Nation of Alberta, along with Isaac Plante on December 12, 1933. This information is outlined in a letter sent from Métis leader Jim Brady to Métis leader Malcolm Norris.
Adam Joachim lived his life as a businessman, trapping and guiding on Alberta’s eastern slopes. His progeny continues in these business ventures to this day. Curtis Hallock is the great-grandson of Adam Joachim and 15-year-old Payton Hallock is the 2nd great-grandson. 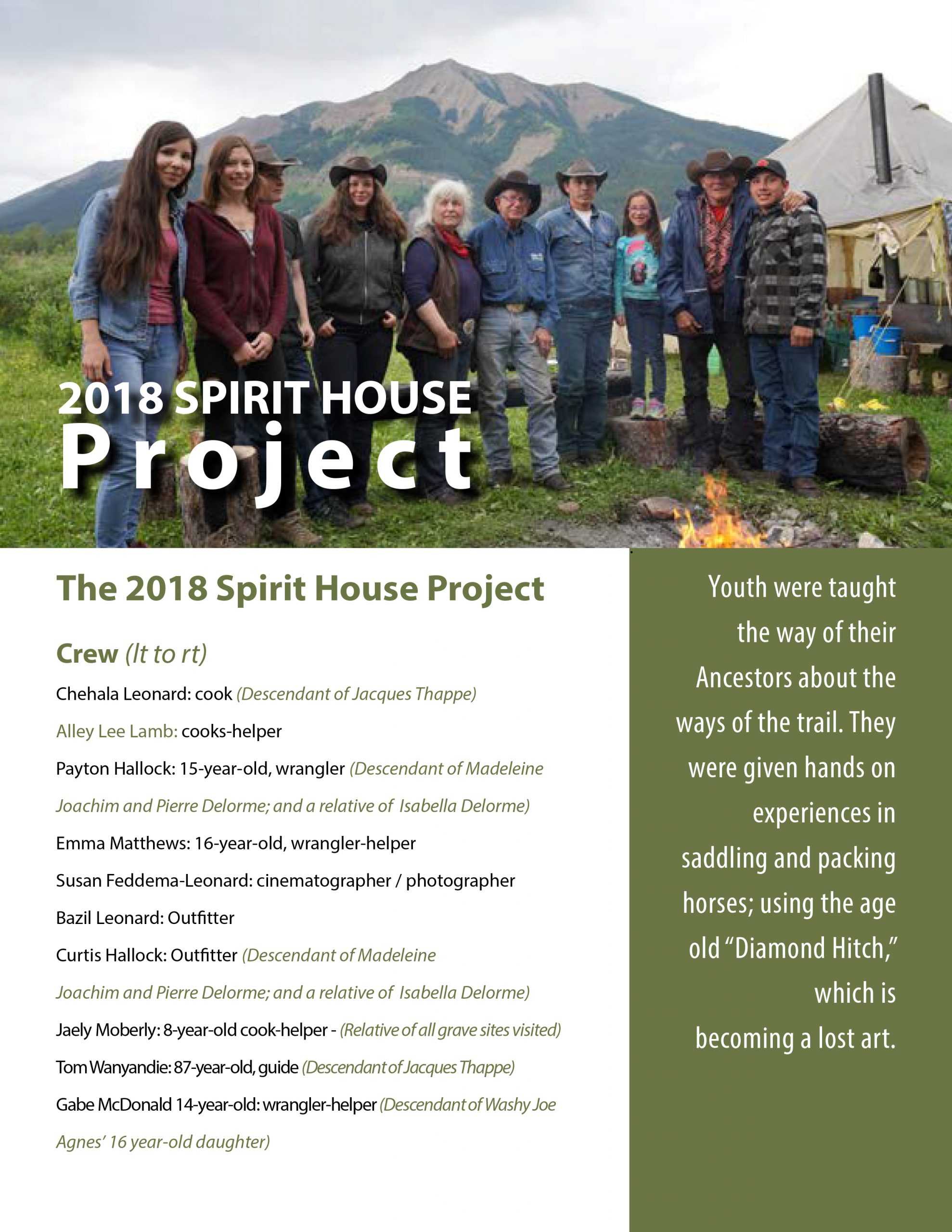 2018 Spirit House ReportPreserving the traditions and culture of the Canadian Rocky Mountains
Click to download the report.
Go to Top